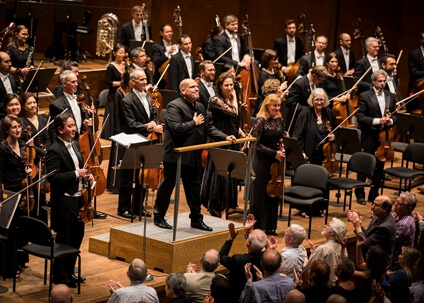 The New York Philharmonic plays a leading cultural role in New York City, the United States, and the world. Each season the Philharmonic connects with up to 50 million music lovers through live concerts in New York City and on its worldwide tours and residencies as well as with its digital recording series, international broadcasts, and education programmes.

In the 2017-2018 season, during which Jaap van Zweden serves as Music Director Designate, the Philharmonic celebrates its greatest strengths and essential commitments while looking to the future as an innovative, global ensemble, spotlighting its musicians and partners, dedication to new music, wide-ranging repertoire, education programs, and accessibility.

Jaap van Zweden has become an international presence on three continents over the last decade. The 2017-2018 season marks a major milestone as he completes his ten-year tenure as music director of the Dallas Symphony Orchestra and becomes Music Director Designate of the New York Philharmonic, anticipating his inaugural season, in 2018-2019, when he becomes Music Director. He continues as music director of the Hong Kong Philharmonic, a post he has held since 2012.

In addition to performances with the New York Philharmonic in New York and on tour, his 2017-2018 season highlights include returns to the Chicago Symphony, Royal Concertgebouw, Rotterdam Philharmonic, and Netherlands Radio Philharmonic orchestras and to the Chamber Orchestra of Europe.

You can buy tickets for these performances through the official website of the NCPA.